The system I'm currently working on integrates with several external systems, over HTTP, using simple (RESTish) web-services. I really don't want to involve those external systems while testing my own, though; I want to stub 'em out.

My first attempt involved stubbing out HTTP calls using my mocking framework of choice. I'm using RestClient, which I like a lot, and stubbing out RestClient API calls worked quite well. It kept on working quite well for several hours, until I decided to refactor a little, using RestClient in a slightly differently way, at which point it broke completely. Bother. I really don't like having tests coupled to implementation details, so went searching for another way.

FakeWeb looked pretty good, in that it stubs things out at the Net::HTTP layer, which I'm unlikely to refactor out of the picture. In the end, though, it's not really what I wanted. I wanted to be able to do things like:

In short, I wanted a Fake Object, rather than a simple stub.

It occurred to me around about then that we already have plenty of tools for describing the behaviour of web-applications: they're called web-application frameworks! Many of them are too heavy-weight for my purposes, but Sinatra is nicely minimal. So, 60 lines of Ruby code later, I had a little web-app that mimicked one of those external web-services sufficiently for my testing. Win!

But waitaminut. I really don't want to have to start a separate process running my fake web-service, and talk to it using HTTP. That's going to be slow: network I/O isn't cheap. Isn't there some way I can use something like Sinatra but still keep everything in-process?

There is now. ShamRack plumbs Net::HTTP directly into applications built to run on Rack. Which includes all Sinatra apps, as well as Rails, Merb, etc. 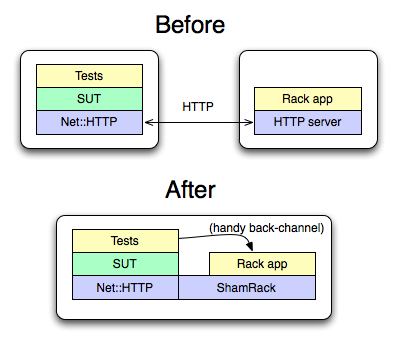 Using ShamRack, I avoid the network traffic, making the tests a whole lot faster (about 25 times faster, in my case). Plus, I avoid the complication of having to start and stop an external web-server. Finally, because my fake web-service app is in-process, I get a handy back-channel I can use to setup or inspect it's state during tests.

If you find ShamRack handy, or have ideas about how it could improve, let me know!